Orlando Airport Shuttle Service
Shuttle rides for MCO airport can be easier and cheaper than most airports in America. With a wide variety of theme parks and hotels there is a lot to choose from when your flight lands in the Orlando area from shared ride vans that can take you almost any hotel in the Lake Buena Vista or Kissimmee near the theme parks. If your group is bigger than most then taking a private van all together may help reduce the overall cost of the shuttle ride.

MCO airport terminals
You can use our map to assist you with finding the general location of your driver in the terminal at MCO along with the instructions located in your email confirmation. 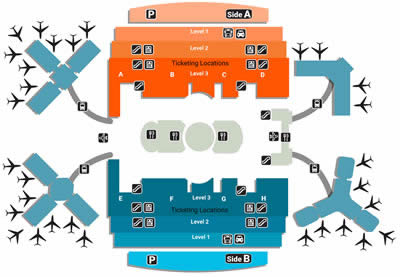