Warsaw Airport Shuttle Service
When traveling from the airport to your hotel or other lodgings, there are many options. Of course, you can always try your luck with a local taxi service to get to your destination. However, there are other services offered at most airports, including the Warsaw, Poland airport code WAW.

Shared Ride Van
Are you visiting Warsaw or are you a resident of Warsaw and you would like to access transport services? Contact us book for a shared ride van. It is cheap and got great services. We can transport you to both formal events and tourist activities like visits to the Wilanow Palace.

Private Van
Enjoy our state of the art transport services by accessing our private van services. Get to enjoy door-to-door services in the whole of Warsaw city. Get to travel to see the Royal castle.


Private Sedan
Enjoy a mix of style, superiority and convenience at the same time. Call us to hire a private sedan to move you to any place of your preference. Get to go sightseeing at Ostrogski palace.

Local Personal Drivers
Call us a get a knowledgeable local personal driver and get to enjoy polished services. Get to visit tourist spots like Warsaw Citadel.

Private SUV
Want to attend to a sporting event with your friends to the Polish Army Stadium? Look nowhere else. Our private SUVs will not only offer you airport transfers but also help you get to visit various points of interest.

Taxi Cab
Experience no delays while traveling to Warsaw by accessing our taxicab services. Get a chance to travel to places like Warsaw zoo.

Stretched Limousine
Access our trendy and upscale stretched limousines at affordable prices for airport transfer and ground transportation to places like Copper-Roof Palace.

Bus
Get great discounts by hiring our buses to transport you together with your family and friends especially if you are traveling in large group. Get to witness among others the beautiful site of the Saxon Garden.

WAW airport terminals
Poland’s Warsaw Chopin Airport is your gateway to this charming European capitol city. Once you land here, you’ll probably want to get straight to exploring this great city. Use the map below to navigate WAW like a pro. 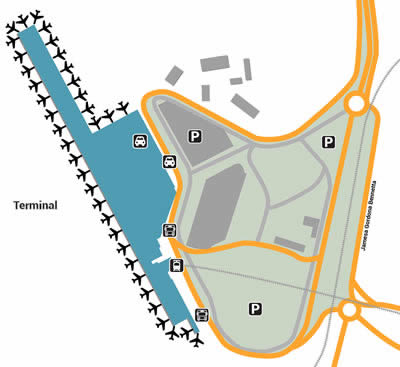