Vancouver Airport Shuttle Service
There are many options for getting around Vancouver, especially from hotel to airport and vice versa, including standard ground taxi services. Namely, the Vancouver Shuttle is a great choice. Ground transportation at YVR Airport includes a few bus lines, the N10 night bus run by Coast Mountain Buses, and the C92 route run by Canada Line, which connects to the popular Bridgeport Station in Richmond. Rapid transit is also offered by SkyTrain, on-site subway located at the YVR Airport Station beneath the airport. Go the simplest option by booking a personal shuttle for custom drop-offs and timely pick-ups instead, making arrangements through either area shuttle or taxi providers for pleasant views and the convenience of commitment- rides.

Shared Ride Van
Are you in Vancouver for official business or personal holiday? Our shared ride vans will offer you the best travel experience at a discount. From airport transfers to tour transport to places like Stanley Park. Get a lift to an all-in-one locale with a ride that offers custom drop-offs, reserving a shared ride van from area shuttle companies to enjoy rooftop eats at The Western Bayshore, also considering the luxury of Fairmont Waterfront for an incredible 5-star experience and renowned views of Vancouver Harbour.

Private Van
We offer pickup and drop off services at different locations in Vancouver. Call and book our private van for official business transport and/ or for leisure travel activities like visiting to Jericho Beach. Take care of up to a dozen passengers with a private van as your personal steed, contacting area providers to make it to widespread locales, whether it’s the summer biking paths along the Vancouver Seawall or wintry views atop Grouse Mountain.

Private Sedan
Our prestigious private sedans allow you to turn up at your preferred destination in style. Book us for the classy ride either for airport transfer or for tour travel to places like Marine Building. Take the priceless gift of silence everywhere you go by booking a peaceful sedan, making arrangements with area sedan companies to take your time on long drives through scenic North Vancouver in the morning, then waiting for sunset at famous lookouts like Capilano Suspension Bridge at night.

Local Personal Drivers
Our drivers have extensive knowledge of the Vancouver city to ensure you travel conveniently. Book us for both business services and pleasure activities like traveling to tourist spots like the Beauty Biodiversity Museum. Find parts of the city cherished by locals with a local personal driver to show you around, finding the best portside cafés to wake up to while looking forward to the city’s vibrant nightlife, from live music venues to late-night diners, all at the ease of letting your driver do the work.

Private SUV
Access our private SUVs directly from any location. Ask us for airport transport and other activities like touring the Cypress Mountain Ski Area. For a ride that lets you take control, reserve a private SUV from local companies, the perfect lift for carrying up to six passengers from one locale to the next, whether it’s historic landmarks from the 19th-century or thee vast network of island trails at Stanley Park.

Taxi Cab
Do you wish to travel Commodore Ballroom or Sylvia Hotel? We offer personalized taxicab services to transport you to and from airport, hotels and tourist sites. Business travelers know the importance of efficiency, making taxis especially helpful for rides to the Vancouver Convention Center. Arrive to the scenic waterfront space with the freedom to come and go, whether it’s to port restaurants and promenades or cross-town adventures via nearby ferry and subway stations.

Stretched Limousine
Experience the life in Vancouver in a unique way by traveling in our stretched limousines. Let us handle your travels to wherever you want to go including tourist destinations like Empire Landmark Hotel. Find the finer things in Vancouver by making sure you’re in a vessel that appreciates each second, booking a stretched limousine from local limo providers for a chance to make grand arrivals. Sit down for an art deco symphony at The Orpheum, or go for something more quaint at the intimate Vancouver Playhouse, all while looking forward to world-famous Pacific Northwestern dining, from Bishop’s on 4th to Hawksworth on West Georgia.

Chartered Bus
Traveling as a group, we have charter bus transfers that can accommodate you. We can also take you to places like Baden-Powell trail for hiking. Keep the faith when transporting over a dozen passengers by booking a chartered bus, moving across vast destinations perfect for everyone to roam free, watching the seasons change across VanDusen Botanical Garden, or finding your favorite fish at the massive Vancouver Aquarium.

South Terminal:
- Level 1: check-in, security, baggage claim, car rental services, taxi stands, and a gift shop.
YVR airport terminals
When you land at the Vancouver International Airport, you will find several ways to get to your ride whether it is a shuttle or a black car transfer. 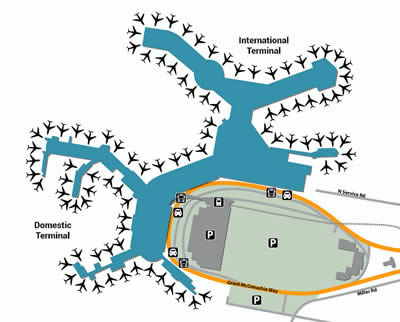