St. Petersburg Airport Shuttle Service
There are several PIE airport shuttle services with great service such as AirportShuttles.com St. Petersburg, Go Airport Shuttle, and Carmel Car and Limousine are among the top providers in the St. Pete area. These provide a lasting impression to both domestic and international guests visiting the region.

Shared Ride Van
Visit and travel the city of St. Petersburg in our best shared ride vans available at the airport and at several points across the city.

Private Van
Get to the Museum of Fine Arts or the Sunken Gardens with vans for hire; pickup and drop included on request and ground transportation of all types covered.

Private Sedan
Sedans with professional chauffeurs in the city of St. Petersburg especially for your comfort; hire before arrival and book for whole trip if needed.

Local Personal Drivers
Personal drivers scattered at all major points in the city like the Tropicana Stadium or the Mahaffey Theater to pickup anytime you want; contact for instant transport.

Taxi Cab
Hiring cabs has never been this easier! Best clean taxis for hire with local drivers to take you to places like the Mazzaro Italian Market or the Florida International Museum fast.

Stretched Limousine
Style and panache are on offer in our limousines for hire in St. Petersburg; start of your journey with pickup at airport and continue with transfers to destinations like Salvador Dali Museum.

Chartered Bus
Exclusive buses for hire to take you to places like Fort De Soto Park or the St. Petersburg Pier; reserve early to get discounts and special offers.

PIE airport terminals
Traveling at St. Petersburg Clearwater International Airport is easy. Find out where to meet your airport sedan with this comprehensive airport map. 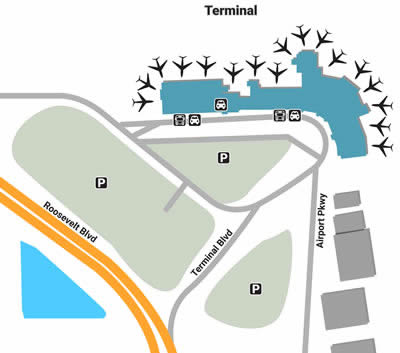