Rome Airport Shuttle Service
The airport is 26 kilometers from the city center, which makes transport from the airport crucial.

Shared Ride Van
Take into consideration the shared ride van services for your vacation in Rome, especially if your wish is to save up on your traveling costs.

Private Van
The Colosseum, the Pantheon, the Roman Forum – should we go on naming these famous constructions? Manage to visit all of them by booking a private van.

Private Sedan
Are you on your honeymoon or on a romantic holiday and you wish to offer you the most beautiful, fantastic experience in Rome? Then you should see about our offer for a private Sedan, so that you can easily get from one point to another.

Local Personal Drivers
Trustworthy and able to offer you instructions about the area, our local personal drivers are a great option for ground transportation during your holiday.

Private SUV
Familiarize yourself with the stunningly hypnotizing city of Rome in a private SUV.

Taxi Cab
While in Rome, you can set your sights on the Fountain of the Four Rivers, the Basilica Papale San Paolo Fuori le Mura or the Church of Sant'Ignazio di Loyola. Our taxicab chauffeurs are always there to help you get where you desire.

Stretched Limousine
When in Rome, act like the romans! Offer yourself an imperial treat and employ the stretched limousine services.

Bus
Upon your arrival, as well as your departure, hire our mini bus services - they are especially thought of so that you can rest assured that your airport transportation would be tended for.

FCO airport terminals
Leonardo da Vinci–Fiumicino Airport in Italy’s Eternal City serves this busy European metropolitan area. If you want to be sure to get through FCO as quickly as possible, we’re here to help. Use this terminal map to guide your way through the airport. 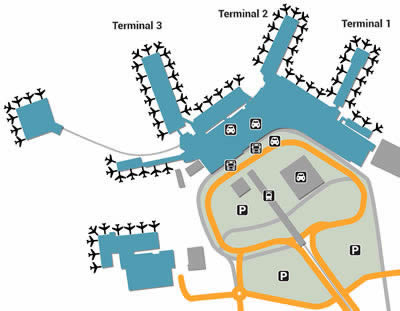