Durban Airport Shuttle Service
Ground transportation is provided by King Shaka Shuttle Services which has consistent, insured, and reasonably priced service, 7 days a week. The same company also rents cars for independent transportation. Ground transportation at DUR Airport includes a few taxis and car rental services, plus a railway line that intersects with the adjacent R102 highway. A high-speed monorail is currently in the works for the 2020s. Avoid public transportation by getting a personal shuttle instead, booking through either area sedan or private SUV companies for instant pick-ups and wide windows perfect for seeing the North Coast.

Shared Ride van
We have a discount transportation offers with our shared ride van. Grab the opportunity by booking our shared ride van for reservation and enjoy a comfortable spin on the North Beach.Home to urban ports and beaches, getting a one-time lift to the perfect downtown destination is best done with the help of a shared ride van. Reserve with area airport transportation shuttle providers to make the day special, looking forward to deluxe seaside views at Belaire Suites Hotel as well as western-friendly opulence at the 5-star Hilton Durban.

Private Van
Our private van provides classic traveling services both for ground transportation and door-to-door services. Hire and experience the great moment of comfort while visiting the Gateway Theatre of Shopping. Find the best part of the day by getting a ride that can take care of everyone’s needs, reserving a private van from local ground transportation shuttle companies for easy lifts alongside the freedom to take your time, whether it’s through the many landscapes of Kenneth Stainbank Nature Preserve or the colorful plumage inside Umgeni River Bird Park.

Private Sedan
Our first class private sedan will offer you the best door-to-door services. Call for a pickup by one of our professional drivers while traveling to Mitchell Park Zoo. Remember your time in Durban with a ride that offers endless moments, booking a private sedan with local sedan companies for intimate escapes into the quiet, choosing between Earth-centric exhibits at the Durban Natural Science Museum as well as hidden beaches and markets sprawled across Durban North.

Local Personal Drivers
Have an encounter with one of our professional drivers who will drop you off at your destination within a very short time. Our professional drivers are always prepared and willing to assist you arrive safely. Get into the underbelly of what makes Durban such a special city by getting the local’s tour with a local personal driver, finding quaint restaurants with tastes of grandeur as well as low-key clubs perfect for falling into the rhythm of South Africa’s music scene, all at the ease of asking.

Private SUV
Hire our private SUV for a spin to the Durban Botanic Gardens and the Umgeni River Bird Park. You will experience the comfort and luxury it will provide you. Keep everyone safe and comfy by reserving a private SUV with area companies, fitting up to six passengers for family-friendly fun ranging from the acclaimed shows at uShaka Marine World to the modest-sized mammals and on-site tea garden at Mitchell Park Zoo.

Taxi Cab
Come and experience the amazement of luxury in our private taxi. Hire and call one of our professional drivers to pick you while in need of transfers to your hotel. Business travelers arriving to an event at either Durban ICC or Olive Convention Centre should reserve a taxi to avoid the hassle of traffic, getting dropped off right in front, afterward taking as long as you want in the city’s coastal charms with 24-hour access to a ride that has your back.

Stretched Limousine
We have a first class private limousine for ground transportation and Airport transfers. Hire for a pickup and enjoy the comfortable transfer to Virginia Airport. Find the finer side of Durban with a stretched limousine as your gilded lift, booking with local limo providers for elegant drop-offs to the tablecloth eats of 9th Avenue Bistro as well as elegant arrivals at The Playhouse Company, a renowned local stage known for its musicals and vivid stories on local culture.

Chartered Bus
We offer classic shuttle services. Pick up and drop off is at your convenient shuttle terminal. Those with over a dozen passengers to carry across great distances should get a chartered bus to make each moment worthwhile, finding getaways big enough for everyone to get lost, whether it’s at the many exotics of Durban Botanic Garden or along the boardwalk trails of Beachwood Mangroves Nature Reserve.

DUR airport terminals
When you are traveling to Dublin, finding your way through DUR may be difficult the first time you are there. This terminal map will help you find out where your terminal is and so much more so you can enjoy your trip. 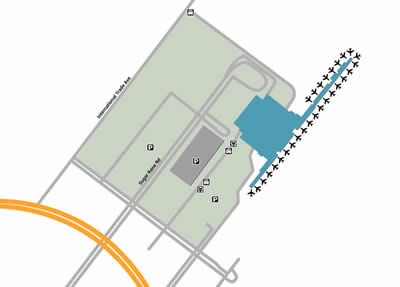