Beijing Airport Shuttle Service
Many passengers arriving at Beijing Capital International Airport use cabs to reach the city. The drivers will likely not understand English, so try having your destination written in Chinese. The Airport Express train runs between the airport and the city, with connections to other parts of Beijing. The Airport Shuttle Bus is a cheaper and widely preferred option. The service runs from the airport to the sedans and minivans from the airport every 10-20 minutes.

For more personalized and custom transport options, the following are highly rated and recommended for safety, reliability and efficiency. They provide limousines, luxury sedans and minivans from the airport to your hotel. Drivers also command some level of English and should be able to understand your destination. In most cases they will know your destination in advance from your booking.

Terminal 2 of PEK Airport connects to the Beijing Subway, which offers one-way trips that take about 15-20 minutes for downtown arrival. There are also a few bus lines just outside Terminal 1. Avoid having to wait for the next scheduled pick-up by scheduling your own ride ahead of time, booking a shuttle through either us for timely pick-ups and convenient bag-handling services.

Shared Van Ride
When it comes to quality transportation services, our shared van ride is your number one choice. Experience a difference by driving in our shared van ride. Beijing Capital International is one of the busiest airports in Asia. Let us pick you up from the airport and drive you around the city. For simple one-time lifts to your hotel, book a shared ride van, enjoying low-key arrivals to your temporary home, whether it’s an hard-to-reach downtown locale like Kerry Hotel or a distant resort in the northern mountains like Yuansu Hotel.


The Beihai Park is a perfect place for family visits, which includes a playground for kids with amazing restaurants. Our Private Sedan is readily available to drive you to this amusement destination. The Forbidden City is located about 15 miles from the airport. There is a lot of history to learn at this amusement palace. With rugged mountains in the northwest and lowly villages to the southeast, Beijing offers graceful peace just outside its bounds. See it all by getting a private sedan, looking forward to the hyper-real architecture of Tongzhou as much as the otherworldly terrain of Changping.

Private SUV
Our Private SUV are now offering transportation services from the airport to the Palace Museum, an attractive historical buildings with impressive architecture. Did you know terminal 1 handles all the domestic flights? Learn more about this and other interesting facts about this airport by driving in our Private SUV. Carry up to six passengers without skipping a beat, booking a private SUV through us to take your time checking out the coolest family-friendly attractions, from the aquatic creatures at Beijing Aquarium to the 15th-century lookouts atop downtown’s Temple of Heaven.

Stretched Limousine
No trip in Beijing is complete without a visit to the Great Wall at Huanghuacheng. Our custom stretched limousine will offer you a comfortable ride to this destination. We have a stretched limousine to drive you to the Temple of Heaven to experience a spiritual healing. Make every corner you turn a stylish one by booking a stretched limousine from our area providers, showing up to fine dining eateries like King’s Joy and Opera Bombana in matching looks, also considering an opulent night of entertainment at the National Center for the Performing Arts.

Taxi Cab
Most tourists love to visit the Summer Palace (Yiheyuan) for a relaxing evening. Let our taxicab pick you up as agreed. We offers airport transportation services to the most interesting places in the city including Summer Palace, where Qing emperors used to hang out during summer. Popular for being the financial capital of the east, seeing a taxi in Beijing is like seeing a seagull at the beach. Reserve today to avoid heavy traffic tomorrow, arriving to either the Beijing International Convention Center or the China National Convention Center, both of which are located less than 1 mile apart.

Local Personal Drivers
We take pride in our highly skilled local drivers. We have value for your safety. This is why you need to let our drivers to take you around the city to the Mausoleum of Mao Zedong. Experience a safe and authentic ride with our highly certified local personal drivers to the Jingshan Park. Enjoy clear views of the city. One of the best ways to see a city is through the eyes of an insider. Follow the advice of someone who knows Beijing like the back of their hand with a local personal driver as your chauffeur, arriving to the coolest restaurants & shops while taking care of transportation along the way.

Private Van
The Lama Temple offers you’re relaxing and spiritual moment. We have a private van to drop you off. Do not forget to take our private van to the Palace Museum for a unique outdoor experience. Make sure everyone gets where they need to be by booking a private van, perfect for groups exceeding a dozen. See expansive locales with all the freedom in the world, from the lakeside quietude of Summer Palace to the vast promenades and trails at Beijing Olympic Park.

Bus
If you a looking for class, then you are looking for our bus. Let us drive you to the Confucius Temple. The Great Wall at Mutianyu is a must visit. Let our bus pick you up and drive you to this wonderland. The best ride for taking care of over a dozen passengers, chartered buses know how to get the job done quick. Utilize the ride to see as many landmarks as possible, moving from the millennia-old ambiance of Beihai Park to the tranquil trails of Dong Xiao Kou Forest Park, all without asking what-ifs.


PEK airport terminals
Get to your ride so you can get transferred to your destination in time for your big event or vacation. 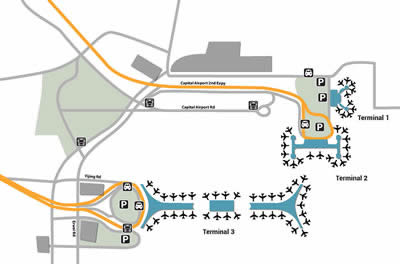