Helsinki Airport Shuttle Service
The Helsinki has a wide variety of transportation options. The airport is actually the city’s largest taxi station and the city’s second largest bus station.

Shared Ride Van
Our Shared Ride Van service offers you the opportunity to reduce your travel costs by sharing a ride for reaching wonderful destinations like the Museum of Contemporary Art Kiasma (Nykytaiteen Museo) or the National Museum of Finland (Suomen Kansallismuseo).

Private Van
With Helsinki Private Van, you can adjust your trip to your personal needs and desires, following a timetable you create for yourself.

Private Sedan
You can choose to use this service for airport transportation or simply for your explorations of the city: you can get a glimpse of the most interesting visiting sites in Helsinki, such as the Fortress of Suomenlinna or the Mannerheim Museum.

Local Personal Drivers
Should you decide to marvel at the wonders of sightseeing the Ursa Observatory (Ursan Tahtitorni) or admire the exhibitions at the Ateneum Art Museum, our local personal drivers are at your service.

Private SUV
Another method of ground transportation you can opt for is the Private SUV – no matter what the location, we can pick you up and drop you off.

Taxi Cab
If you want to take a trip to the mesmerizing Pihlajasaari Recreational Park or the highly entertaining Helsinki Zoo (Korkeasaari Elaintarha), Taxi Cabs are at you disposal.

Bus
You can always decide to employ our mini bus services for getting from one tourist destination to another.

HEL airport terminals
Helsinki is the capital of Finland and HEL International Airport is the airport which services the entire Helsinki metropolitan area. Using a terminal map like the one below can help to make your flight much easier. 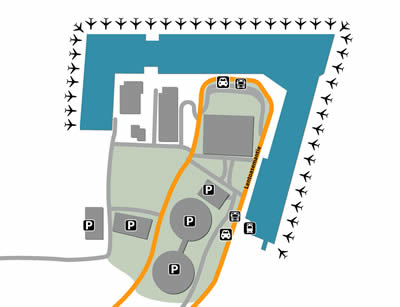